While scars can never be completely vanished, scar removal procedures are meant to minimize their appearance. There are many non-surgical methods used for scar removal such as: injectable fillers to fill concave scars, light therapy and lasers, dermabrasion and chemical peels. For severe scarring, surgery is needed to remove the old scar. The incision may be closed with either skin grafts or tissue substitutes. In some cases, a tissue expander will be placed below the surface of the scar and slowly filled with a sterile solution. Once the skin has sufficiently been stretched, the expander and scar are removed. The remaining skin is then stretched to cover the open area.

All scars are white, as there is an absence of the melanin pigment producing cells in scar tissue. If the scar can be made smaller/less wide by a scar revision, this will improve the appearance. To cover the white color, camouflage tattooing works quite well. This is done by permanent makeup tattoo artists that have special training in this technique. The color of your skin is matched to a tattoo pigment that is tattooed into the scar tissue to replace the lost color due to the lack of melanin.

Most fresh scars appear reddish in color, this is a sign of wound healing and new collagen production. Sometimes this healing can be excessive and a hypertrophic or keloid scar can develop. Without seeing a picture of your scar it would be difficult to comment on it. This type of excessive healing or scar formation doesn’t begin until 6 weeks after your injury then you are most likely healing normally. In the event that you are forming scar tissue, a vascular laser such as a KTP or pulse dye are very helpful when the scar is still in its red stages. Once it matures and turns white, other lasers such as Fraxel work well to blend the scar with the surrounding skin.

When to have Laser Scar Removal?

Over time, even the unsightly ugly scars tend to improve. The healing properties of time is amazing. The body constantly remodels and repairs wounds and scars. What a scar looks like when it is fresh is rarely what it will wind up looking like when it is fully developed.

There are instances, of course, where it is impractical to wait a prolonged period of time, such as a disfiguring scar on the face. In those cases, we recommend waiting at least 4-6 months to see how the scar improves on its own before considering revision.

Disclaimer: Results may vary from person to person 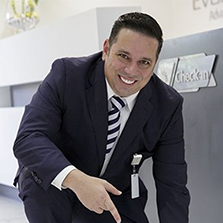 Dr. Cesar Velilla is the medical director and founder of Evolution MD, a center for plastic surgery. Dr. Cesar Velilla is trained and certified by the American Board of Internal Medicine. Dr. Velilla has over 15 years of experience in all areas of aesthetics. He is certified in Botox, Restylane, Perlane, Cosmelan, laser hair removal, laser treatments, among many others.